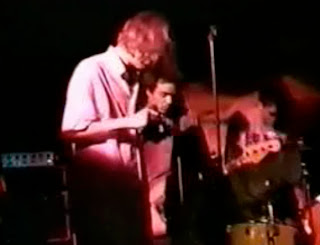 Trawling through old work recently led me to a DVD of Bum Gravy performing circa 1994 at Kings Cross Water Rats club.

Bum Gravy existed somewhere between 1991 and 1995 and played in various locations. Whilst in existance they released 3 and a half cassettes (remember them?) and a 7" double A side single 'Fat Digester/Super M' on Fist Fun Records. In 2001 Antigen Records released a CD compilation of their entire output entitled 'Excretion 2000'. Regularly featured in the pages of NME and Melody Maker for their (literally) crap name, many thought the band to be the over active imagination of music journalists but were in fact 6 or so people from Colchester who were bored with what constituted independent music around that time (read - early Blur, Suede, Shed 7, S*M*A*S*H, These Animal Men, Elastica, Sleeper, Echobelly etc).
High point - supporting Silverfish at the Clapham Grand. The in-house PA engineer allowed Bum Gravy's own soundman access to the mixing desk. He got it so loud it forced the Melody Maker reviewer from the building.
Low point - playing Colchester Tatoo Convention. After setting up the band was forced to wait around for 3 very boring hours only to be asked to "turn it down" 30 seconds into the first song - it was decided there and then to pack up and fuck off.

Try clicking where it says 'here'!

Magic! You know I hear similarities between the Bum Gravies and Primitive Calculators from Melbourne in the early '80s. They were the inspiration for Richard Lowenstein's Dogs in Space film and you can see them here:
http://www.youtube.com/watch?v=LtG9KMTwYsU

Errm, that would be JON not 'John' who was in the band!