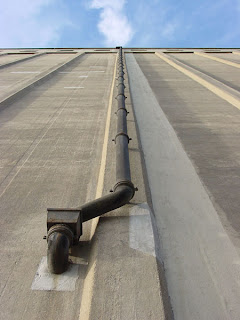 Went to the private view of 'I Came, I Saw' last night, a cruel way to run a show me thinks - if you didn't make it into the show, and there was no way of knowing until the private view whether you had or not, you had to take your work away with you on the night! Saw some very dissapointed people carrying their work out of the door (as Jason said, this could have made an interesting art video in itself). So, I feel for those that didn't make it, especially as with some of the work chosen it was really difficult to see a link between the work and the exhibition concept (first impressions of Ipswich) although that's not to say the work wasn't good. While I like the fact the exhibition was an open submission, so anyone could submit, artist or not, I guess you'd find in any small town art scene clique that local artists will submit anything just to be seen to be in the loop and they probably measure their success against this. You do tend to see the same names again and again. You do tend to see the same work again and again as well. For this show you get the feeling that some artists looked through their portfolios in search of something to submit and there were some really tenuous links to the brief. And again, I have to agree with Jason, the more interesting pieces were those created especailly for the show and/or had a human connection. Having said that, I'm guilty of submitting old work myself (2005), but at least it did fit the brief. Shame my artist statement wasn't included (see below). Maybe the next exhibition shouldn't be open to those that call themselves artists at all because the fantastic thing about this show is that non-artists, people who have never exhibited before, get the chance to have their work displayed in the excellent Town Hall Galleries, a venue that is taking art directly to the people with it's central Ipswich location.

"The first thing I remember seeing on a visit to Ipswich were its docks. Later, when I came to live here and discovered you could walk along the docks I became fascinated by these big bastard buildings. For a short period I worked near the docks and on a daily basis would walk past these monoliths of sheer function. I became fixated by these slabs of honesty and on learning they were going to be demolished knew that I had to record exactly how I saw these beasts. They are gone and they are missed, but here, at least, they are remembered."
Posted by Dubdog at 13:20