Peace, what is it good for? 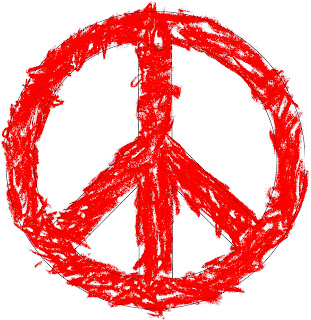 Many graphic designers were celebrating the 50th anniversary of Helvetica in 2007. The celebrations included an exhibition at the Design Museum here in the UK and a film made by Gary Hustwit that has toured the world. However, 2008 celebrates the anniversary of an even more iconic symbol, or symbolic icon even, as this year is the 50th Birthday of the peace symbol. At Happy Birthday Peace you can read the full story and upload your own version of the symbol alongside those of Noam Chomsky and Adam Ant no less - Dubdog's attempt, entitled Child's Play, heads up this post. Why not pay happybirthdaypeace.com a visit and help put a little peace in the world. As a taster, here's a brief history of the symbol from the site.

"The history of the disarmament symbol has been subject to much speculation over the years. It was actually designed in 1958 by Gerald Holtom, a professional artist and graduate of the Royal College of Arts. He presented his early designs to the Peace News office in North London and, significantly, to the Direct Action Committee Against Nuclear War, one of the groups that helped to set up CND. The symbol was first seen in public during the 1958 Aldermaston march and from that moment onwards became identified with CND and its objective of nuclear disarmament.

Ironically the symbol itself is a mix of the military semaphore signals N — representing nuclear — and D — representing disarmament (semaphore alphabet). However, Holtom, a conscientious objector during the Second World War, subverted this use of semaphores by placing the D over the N, the “upside down logo” signifying his anti-military principles. In a more personal account of his design, Holtom later wrote to Hugh Brock, editor of Peace News, saying,

‘I was in despair. Deep despair. I drew myself: the representative of an individual in despair, with hands palm outstretched outwards and downwards in the manner of Goya's peasant before the firing squad. I formalised the drawing into a line and put a circle round it.’" www.happybirthdaypeace.com
Posted by Dubdog at 20:59