I don't know why, but my brother, or my sister, my memory is somewhat sketchy, bought my uncle a Dub LP. African Dub Almighty, Chapter 3 by Joe Gibbs and The Professionals. It must have been 1977 or '78, which would have made my uncle about 47. I would have been about 9. We used to go and visit my uncle, who lived with my grandmother in a council house in Rose Hill, just outside Carshalton in Surrey. He had lived there since my father's 4th birthday in 1933.

We didn't often listen to music when we were there. Outside my brother and sister, none of my family were big music lovers. My dad had a few classical LPs, a Bob Dylan compilation and several Jazz LPs, in particular Satchmo. My Dad did go out of his way to buy The Beatles Sgt Pepper when I was 6, I know not why, it was very uncharacteristic (not to mention several years after its initial release). From what I can remember, my uncle's tastes stretched to Armenian folk music and he would also leave Radio Three playing quietly, very quietly, on his bedroom radio all day. When you went upstairs in this tiny house you would wonder where the music was coming from; it was so quite as to defy directionality. He did, also, have a Woody Guthrie LP, Dust Bowl Ballards, that I really really got into later on in my teens. For some reason on a visit to our then home in Mansfield he bought a cassette of Hoagy Carmichael from a record shop in Chesterfield and left it behind. This, I also got into.

Anyway, I digress so early on. One time, we were paying a family visit to my grandmothers, or Nanna Dink as we called her due to being vertically challenged. My grandfather and my great aunts from my mother's side of the family came round as well, they only lived 5 minutes walk away. Their tiny front room now housed my grandmother, Mum, Dad, brother, sister, grandfather, two great aunts and myself, all dabbling in sherry and wine (excepting me, of course, only being 9 or so). There was possibly a girlfriend or boyfriend of my brother and sister included in the mix as well. My uncle, for some reason, decides to put on this Dub LP that one of my siblings bought him. Out of the speakers comes music I have never heard before. It was strange and mysterious. There were heavy bass lines, defined above all else. They were rock solid, carrying the music forward. There were occasional refrains of keyboard and guitar echoing in and out of the melee. There were electronic explosions, chicken caws and doorbells disappearing from the organised chaos as quickly as they arrived. And the weird percussive rhythm. I tried but failed to tap it out and but was instantly hooked. It didn't matter that to my young ears every track sounded the same. And I now believe my love of Dub was somehow sealed the minute my grandfather despaired with the refrain "call that music?" 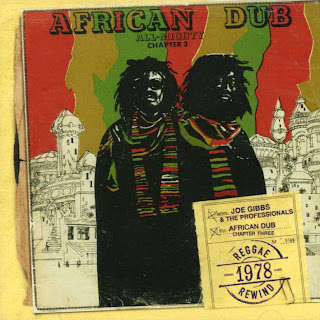 The sleeve was so tempting as well. A red, black, green and gold illustration of two dreadlocked men walking through what looked like a market place with a red, gold and green border and clenched fists on the reverse. The information on the sleeve was confusing to me, which only added to the allure. Was the album called Chapter 3 and the band called African Dub or Almighty or visa versa? I couldn't work it out. I now know it was recorded by Joe Gibbs and the Professionals and is the best of the 4 African Dub LPs they cut in the 70s. Several years later, around the time my family got their first tape deck, I committed this LP to tape as I did the Woody Guthrie one. I had now learned a little more about reggae having honed my own teen tastes to the chart sounds of The Specials and The Beat. Later, I discovered the Clash, in particular Black Market Clash which contained Bankrobber and the still excellent Armagideon Time with extended Dub versions of both. And so my obsession grew, long before I ever smoked dope and it still continues to this day, long after I have given it up.

What a wealth of autobiographical material! It does say '78 on the sleeve. It's quite possible that I bought the record, although I don't remember that for a fact. I would have been aware of dub reggae by then of course, without being anything of an aficionado, so the purchase would have been educated randomness rather than a finely-honed definitive choice. Somewhat sobering to realise that he was more or less the same age as I am.