Luckily my King Of Limbs package, the latest physical release from Radiohead, wasn't damaged by being left in the sun all day by our local postie. I had to resist ripping the wrapping off to see if the vinyl was warped as soon as I rescued it from my doorstep and got it through the door. I resisted because I wanted to get some photographs of the unveiling, as I had avoided reading any blog posts about it and I didn't know what to expect. 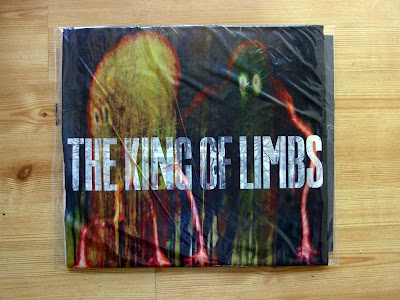 Thankfully the 10" discs weren't warped, but the packaging was pretty conventional, so overall, no major surprises. That said, the artwork generally didn't disappoint. But then Stanley Donwood rarely does in my opinion. From the paintings and drawings that adorn the record sleeves themselves, along with the screen printed CD sleeve on uncoated cardboard, to the newspaper accompaniment filled with more drawings, paintings, random text and photographs (newspaper not pictured), it is a package to be pored over. And like all great album art, one that needs to be pored over while listening to the album as an accompaniment to the music. In fact, you have to play the record several times through in order to do the artwork justice, considering that King Of Limbs is a relatively short recording, and the artwork is pretty extensive. The promise of the first ever 'newspaper album' in press releases many months ago, long before the physical release was available, unfortunately proves to be a let down, or rather it doesn't live up to what my imagination conjured up of what that could have truly meant. But that is a minor point, and that was marketing after all, (sucker). 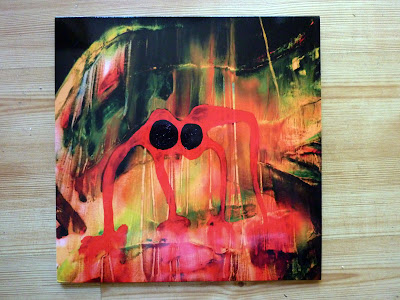 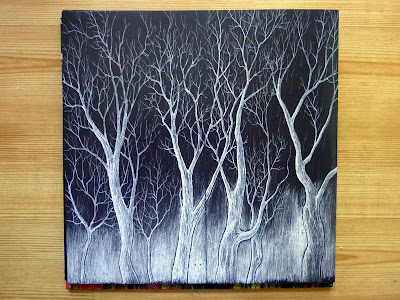 That said, there is one disappointing aspect of the whole, and that is the inclusion of the acid tab style sheet of icons. 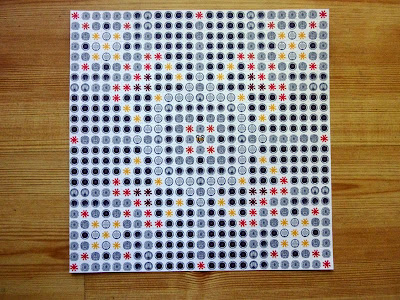 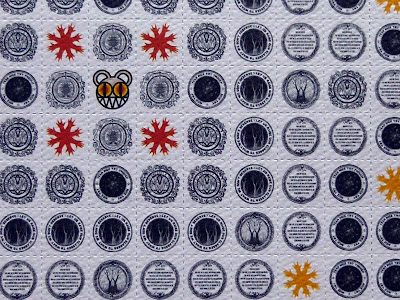 The reason this feels like such a let down is not because of the item itself, but because it is so incongruous to the rest of the concept. It feels like a last minute idea. One that someone felt just had to be included regardless of whether it aesthetically worked with the rest of the package. Unfortunately it breaks the tone of voice of the whole. It is rare that Stanley Donwood appears to have a moment of insecurity about what he does, either in his own work or for his Radiohead commissions. However, that is exactly what this feels like, a last minute addition, included incase people felt they weren't getting their monies worth. Personally I think it would have been better to keep it for its own purpose rather than for it to be shoehorned into another. Otherwise, why not throw in a pack of stickers as well, a few badges, and how about a Radiohead patch to sew onto denim jackets?
Posted by Dubdog at 14:04