I got the new Roots Manuva CD, 4everevolution, through the post today and was immediately struck by the track listing on the reverse. 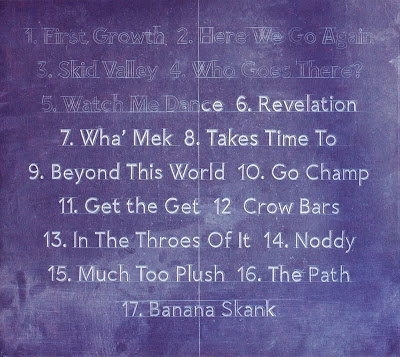 From the photographs I'd previously seen of the cover, I hadn't realised that what I was looking at was a real stone carving. However, this is clearly the case seeing the reverse. Stone carving is very beautiful when done well, and the type here demonstrates that. I was also drawn to the fact that the process is on display. Rather than seeing the finished article, we get the see the sketching—the marking out—before the chisel has finished all its strokes and the chalk is washed away. 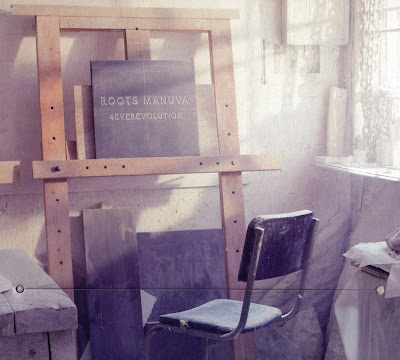 On the inner sleeve the demonstration of process is continued with the stone that forms the front cover shown in the studio of stone carver Jim Kirby.

Designed by Oscar & Ewan, this theme is followed through into the CD booklet, where Rodney Smith's (Roots Manuva) own process is on show, that of his handwritten lyrics. Roots has always been a great wordsmith, twisting words and syllables to fit his dub and hip hop hybrid rhythms, and I've often wondered how he writes. Whether these are first drafts or rewrites is not known, but that doesn't matter. In both stone carving and in Smith's lyrics, we are actually seeing the hand of the artist and that brings a human resonance to fore in this ultra digital age. And while Kirby's hand is literally set in stone, Smith's is formed on paper to later be recorded and evolve into some form of cultural permanence through the tunes we hear as listeners that get lodged in our minds.

It's rare that a CD sleeve provokes so much thought in my mind before I've even heard it. I'm looking forward to getting to know this piece of work if initial impressions are anything to go by.