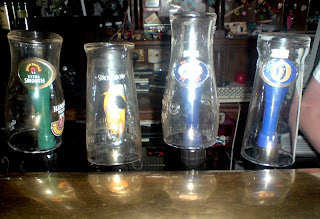 Maybe I should stop going to gigs, I seem to have a bit of a jinx effect! Went to see a band from Cambridge on Friday in a local dive of a pub. Walked in through the door and suddenly felt like I'd walked into a squat. Although the general scummyness added to the atmosphere, when the guy behind the bar said they'd run out of beer and it was only bottles for sale, I knew I was in for a heavy night. Bottles of Becks and Budvar had gone by 9 o'clock quickly followed by Corona. By the time the last band took the stage the bar man had announced that the gin had just been finished. 'Worst pub in Britian dot com' he joked as I took the above photo. My fellow drinking partners and I moved onto the only small bottles left in the fridge, minitures of Rosé wine!!! 3 later and it was definitely going to be a sore head the next day.

Anyway, the band was great. Loud, fuck me they were loud, which sort of makes up for my last live experience (see previous post.) The Tupolev Ghost were more Shellac than Shellac. A four piece from Cambridge who were tighter than a very tight thing. The drummer was sitting incredibly low ala boy racer style and I wondered if this could have explained the chest pains he complained of halfway through the set but it was probably due to his incredibly accurate fast drumming that knackered him out. Despite several requests to turn the volume down by pub staff, I admire Tupolev for not giving in. Platitudes of "yeah, yeah, sure" were proffered but they never touched their amps. Now a double bill worth seeing would be The Tupolev Ghost and Wooderson, if you fancy a Fugazi and Shellac overload. 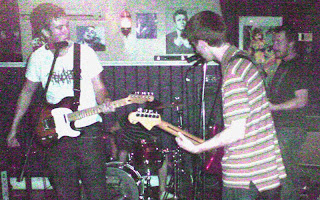 The Tupolev Ghost, they were great.

The band before Tupolev Ghost, who put the gig on, were Bring Out Grandad and they reminded me of a band I haven't thought of in probably over 14 years, a band, in fact, I never actually liked, called Loop. I think I only listened to the tape a friend did for me twice, (sorry Phil.) I must say I was amazed by my recall ability. I wasn't alone though, others agreed there was a tad of Loop about them, which while not great, it is better than there being a loop of Tad about them! (Some people may even get that joke.) I was, however, impressed with their ability to wear their influences on their sleeves, literally. Ramones, Sub Pop and Arab Strap t-shirts were all on display once the grunge check had come off!

I'm not going to mention the first band other than to say, on a very hot day, in a very hot pub, someone in front of me in a pullover decided to manically dance as if really getting into the music but his sense of rhythm betrayed otherwise!

So, far from me wanting to turn Dublog into a gig review blog, I thought I had better redress the balance slightly and try to show that there is some life in the old dog that is Ipswich. Shame it has to come all the way from Cambridge, shame they had to play through a crappy vocal PA, shame the beer ran out, shame the venue was such a dive and shame the audience consisted of about 10 people. Maybe when I'm not there, gigs in Ipswich are fantastic. Then again...
Posted by Dubdog at 22:12

Unknown said...
This comment has been removed by the author.
14:24