Because I've been fairly busy, with both pleasure and business, this post has been waiting to be written since last Thursday, May 1st, when I went to a local pub to watch Wooderson, a Sheffield 3 piece. Their MySpace page promised a Fugazi/Shellac hybrid which got my attention and it also gave me the chance to go out with a friend I hadn't seen for a while.

The evening didn't get off to a flying start when it looked like my friend and I, other than the bands playing that night, were going to be the only audience members. Two paying customers did turn up for the first band but left after the second. The only other people in the bar, other than the three bar staff, were about 4 locals up for a game of pool.

Pints were bought to the sound of a sound check that went straight into the set of the first band, a run of the mill local thrash punk outfit. Their drummer, doing his best multi tasking Phil Collins impersonation, could have performed on his own in a D&V style (anyone remember those One Little Indian wonders?) and they would have been exactly one thousand times more interesting!

The second band up were a baroque cabaret band from Brighton who I suspected were quite well monied by the look of their expensive electric violin and piano lesson confidence. Entertaining, for one night only, yes, but I'd happily never see them again. Trying too hard to be 'different' but sadly replicating every other band that has had the same lame idea. Shame local band Charlie Brown's fans weren't present, they'd have loved it, purely because of the strong front female/piano/vocals. I applauded and I laughed at their in between camaraderie but I was two pints down by this point and one of an audience of 10 not 6 feet from the cello player! 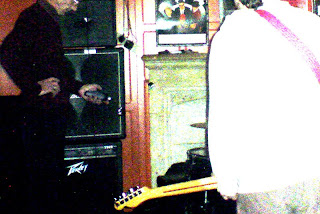 This band had travelled 4 hours to play in Ipswich and this is what they get, small town mentality. They weren't too loud. When I saw a Jam tribute band in the same venue a month ago, they were louder. But the crucial difference was that the venue was packed on that occasion, punters were buying beer and no landlord in their right mind is going to tell a band to turn the noise down when the sound of a cash register is several decibels louder. To add insult to Wooderson's injury, the venue wasn't paying the band, they were going to have to share a cut of the door takings. With 4 paying customers at £3 a head, that's a princely sum of £12 to share between 3 bands, one local, one from Brighton and one from Sheffield!

Wooderson discussing the use of brushes.

Not much has really changed in this country for bands wanting to try something outside of the mainstream. When I was gigging with Bum Gravy I can remember playing the Jericho Tavern in Oxford with Headbutt on a Sunday night and less than 20 people turned up. We were only paid a tenner after we refused to leave the venue if they didn't pay us something, previously claiming they couldn't afford it because not enough people turned up. The ten pounds didn't cover the petrol of the two vehicles we took from Colchester to Oxford, not to mention Headbutt travelling from London. Sorry, but whose fault is it not enough people turned up? We kept our end of the bargain.

Wooderson performing their one song

It's a shame the promoter didn't do much promoting. Nice guy as he is, he didn't really think it through. This venue caters for covers bands, Thursday is a stupid night to put on a gig on the outskirts of a town and he clearly didn't put much effort into drumming up an audience. But, audience aside, the venue's idea that this band were too loud is plainly ridiculous and it worries me the message that Wooderson will take back to their home town. Surely it will be, 'don't bother with Ipswich.' It's a shame because while Ipswich hasn't got any great venues, it does have more open minded landlords and landladies than at this particular venue. We have a new University being built on the docks and the town needs an injection of life that new art student blood, I'd like to think, will hopefully bring. But unless the town is ready to see its own potential, Ipswich, unfortunately, is a dead duck to anyone who isn't into pre-packaged covers bands or the light entertainment offered up by the major venues that do exist in the town. Certainly, its home spawned punk scene is only ever going to take Ipswich down a cultural cul-de-sac.

So, on behalf of Ipswich, I apologise Wooderson, and I only hope they also saw the irony in the sign above the stage that declared the Railway as being Suffolk's Number One Venue (sic).
Posted by Dubdog at 21:14