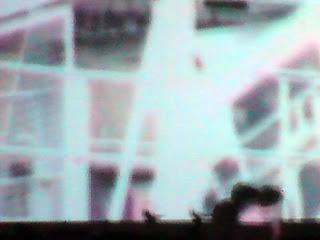 Above: a photo of an unidentifiable artist at hac, an event staged as part of the Ipswich Pulse Fringe Festival. The flyer stated...

"hac brings together local, national and international artists working in the intersection of technology, science and the arts. The concert features performances which utilise wearable computing , live coding, hacking, DIY electronics, and digital performance. The performances are multi-disciplinary and innovative, searching for new ways of engaging the audience and artist through computer code, wearable technologies and homemade devices.
Through the course of the evening new computer programs will be written live in front of your eyes, codes shift and morph, sounds and visuals emerge and explode: human movements make 3D worlds shift and stutter: hacked programs shriek and spew out their internal circuits. The performances will span from sonic soundscapes, experimental noise and feedback loops to electronica and techno."

I was hoping for an exciting and cutting edge evening. What I got was very poor visuals that were nothing more than screensavers accompanied by a few interesting noises. For the most part it was unrefined and experimental. No artist, except for PixelH8 announced their name and his ability to reconfigure old games machines to create 2008 eurobeat didn't exactly blow me away. The artist that held my attention the most was a guy who calls himself ZeroPointEnergy, or so I was told by a reliable source. He had strapped to his arms and head cables that clearly changed and altered the pitch of the noises emanating from his MacBook as he rocked and swayed over it. While throughout the rest of the evening there were interesting sounds being created, and this generated a hope that there would be some development and flow in the soundscapes to get a hold of, mostly sets wallowed and ebbed and didn't really go anywhere and people voted with their feet, displaying a complete lack of interest in the violent aural ambiance of it all. Personally, I've never seen the point of experimentation as an outcome. Sure, take the product of experimentation and give it definition and form, but I'm afraid most of the acts on display were nothing more than pretentious technicians asking too much of an Ipswich audience. Their sets were over long and there was absolutely no correlation between the visuals and the noise to hold attention.

Never the less, I applaud the organizers for putting on this event. Although I'd planned to attend hac for a while, an hour before I left the house I received an email from my brother announcing he'd received an email from a friend in Prague informing him about the event. Is this indicative of the fact that Ipswich is getting more culturally interesting, or is it indicative of the fact there is an extremely small pool of people who are vaguely interested in experimental music?

My friend sent me the info only because there was a Slovakian duo playing that he thought would be interesting and, being in Prague, obviously didn't realise that there's more to going to something in Ipswich from London than hopping on a bendy bus!

I think the whole point of experimentation is that it isn't an outcome, it's a process, but I agree that sometimes being witness to that process can be tedious. Other times it can be exhilarating and life affirming.

Experimental music, on the other hand, is an incredibly broad term and one that I would be cautious of thinking of as a genre - although there are certain forms of what can best be called 'serious' music (post-classical), that could be thought of that way. Experimental music does, however, have a pretty large audience. I've been to two gigs that could be broadly termed experimental music in the past few days: Tony Conrad in the Tate Mod turbine hall on Saturday and last night Faust and both were sold out. Admittedly Faust (who were astonishingly good btw) were playing in what was essentially a pub, the Turbine Hall otoh is not exactly pokey.

If only the same were true of experimental film. Mark Webber once told me that if you can get something about an experimental film event in The Wire, it inevitably fills up. Otherwise, even in London, 40 people is generally thought of as respectable.

Anyway alarm bells ring for me when projections are described as 'visuals' ('motion graphics' has a similar effect), it generally means that what's on offer is little more than moving wallpaper.

Hi, thanks for writing a review. It's good to know what others think/thaught.
As for the organisation of the event I have to appologies that it was a bit of a mess. I was delayed in Italy and only arrived 30mins before it was scheduled to start. As if that wasn't stressful enough there was a derailed train on the London-Ipswich line and half of the acts were unable to make it! Had they made it the whole evening would have had a bit more variety of sounds and images.
Also introducing everyone before they went on would have been a good idea. Stress and panic got the better of me :/

Ryan Jordan (or Zero Point Energy, the organiser of hac...)