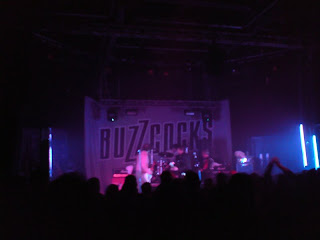 Malcolm Garrett's Buzzcocks' logo still looks great. I was nearly tempted to buy an 'Orgasm Addict' T-Shirt that faithfully rendered Garrett's 7" sleeve collage but thankfully resisted. As for the gig, while it was good to hear Pete Shelley's vocals live and see (half of) the Buzzcocks (and two session musicians) play a faithful rendition of their (fantastic) first two albums, Steve Diggle acted like a complete wanker. A rock star wannabe, the antithesis of what the Buzzcocks were originally all about. I always loved the subtext to Shelley's love songs, teenage gay angst perfectly captured, tense, terse and questioning, but unfortunately Diggle came over all testosterone and Pete Townsend like, throwing his microphone into the crowd at the end of the set baiting the middle aged audience with shouts of 'anarchy.' What a cock.
Posted by Dubdog at 21:11

Where's Devoto when you need him?

He's about to play 5 dates with a reformed Magazine for which I disappointingly missed getting tickets for!

I always liked Magazine. Well, when I say liked, their first, third and live LPs were excellent. Their second and last weren't so hot. Shot By Both Sides is probably my favourite single of all time.

Edwin Collins should know, Rip It Up ripped off a line or two from Boredom.

There's a version of Boredom on the recent Magazine Peel Sessions release.

That line IS from 'Rip it Up'! SBBS is a great record. I recently participated in a performance event in the streets of Kentish Town about the Yugoslav war, organised by a Serbian-born artist, during which I did a spoken performance of the lyrics of SBBS through a megaphone. Figure that out if you can!

Boredom by the Buzzcocks:
You know me - I'm acting dumb
you know the scene - very humdrum

Rip It Up by Orange Juice:
You know me I'm acting dumb-dumb
You know this scene is very humdrum
And my favourite song's entitled 'boredom

I would like to have seen your megaphone performance.

Well of course the Buzzcocks came first otherwise Collins wouldn't have been able to quote them!

There might be some video evidence of my SBBS performance

Oh yeah, I see what you meant now, (note to self, read comments more clearly). Initially thought you were quoting Collins in an interview rather than lyrically.

BTW, just started reading Rip It Up And Start Again by Simon Reynolds.