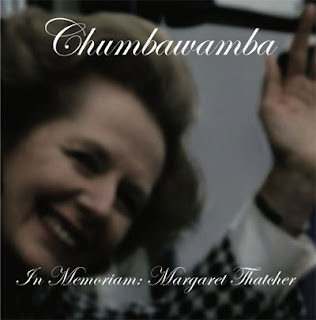 Many are preparing already for the death of Margaret Thatcher. Only the other day I shed a tear with a work colleague who announced their intension to by a bottle of champagne to console the loss he will feel. Over our desks I fondly recounted my memory of the day she was ousted as PM; I was working for a print firm at the time and after the news announcement on Radio One, Simon Bates played "There She Goes" by The Las, such a cheep jibe!

You may think I'm being premature with our Iron Lady still thankfully with us but The Death List 2009 has her as the 45th most likely personality to die this year (they've already scored with Wendy Richards and Dai Llewellyn). Scandalously, they've put the title Milk Snatcher as her descriptor when she's so, so much more than that.

There's more: those arch Leeds wannabe-situationists Chumbawamba have recorded an EP to celebrate, ahem, sorry, I mean to mourn the sad loss we will all be feeling. If you order in advance, they'll mail it out the day the news is made public.

Should you choose to mark the day in a way that doesn't involve listening to some ex-anarcho punks turned pop stars turned folk group, then you may wish to meet with others in the street as reported by Neil Graham in The Observer last week in an article about playwright Ed Waugh. Commiserations are also being planned by Class War who have announced they intend to hold a Wake at Trafalgar Square at 6pm on the Saturday after her passing.

Finally, should you want to start getting respectful now, then you could always have a listen to the "Maggie Thatcher's Death Anthem" by The Maggie Thatcher Experience. It's available for 79p from iTunes and consists solely of the lyrics, "She's dead, yah hoo".
Posted by Dubdog at 11:25

I've pre-ordered my Chumbawamba copy and am eagerly awaiting to download 'Maggie Thatcher's Death anthem' from the Maggie Thatcher Experience with the lyrics "She's dead, Yahoo, let's dance" and 'The Lady's not for Burning (Piss Anthem)' with the lyrics "The LAdy's not for Turning, gonna Piss on her grave, the lady's not for Burning, gonna Shit on her grave!"
It has become a flash mob group to download the songs the week she dies at http://www.FlashMobDeath.tk and is available on iTunes at http://itunes.apple.com/WebObjects/MZStore.woa/wa/viewArtist?id=290613381