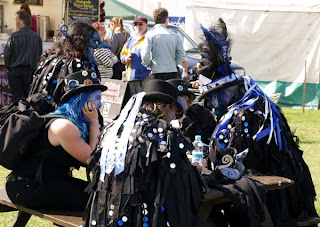 Claire & I spent last weekend at the delightful Towersey Festival, an event that takes over the whole village of Towersey in Oxfordshire and dedicates it to all things 'folk'. 3 stages on site with other performers playing in the village hall, local pub and the chip shop in nearby Thame which was a short ride away on a specially laid on London Routemaster. Only 3000 campers or so and some 2000 odd day visitors that left plenty of space for all. The site even had flushing toilets and showers which left the most hardened folkies comfortable about sticking their fingers in their ears and keeping insects out of their beards. OK, so you have to be tolerant of some of the excesses of the folk scene, such as tankard envy and morris dancing, but I thoroughly enjoyed myself thanks to good company, Thatcher's Cider, and some good performances from the Imagined Village and Spooky Men's Chorale.

It was also good to see an organisation called Folk Against Fascism being supported so widely by punters and festival organisers alike. Apparently the BNP have let slip plans to infiltrate the British folk scene in a desperate bid to find some sort of culture they can call truly English. Read more here in a recent Guardian article . FAF (who I'm not sure they've really thought through their acronym,) state in their leafelt "The British National Party’s manifesto encourages its members to insinuate themselves into the folk and traditional customs of Britain. This involves the appropriation of British folk music and culture as a means of spreading its peculiar brand of racism and intolerance. The UK folk scene is a welcoming and inclusive one; folk music and dance have always been about collaboration, participation, communication and respect.
Folk Against Fascism has been created to take a stand against the BNP’s targeting of folk music, a stand against the appropriation of our culture."

Anti-fascism in the folk community has always been strong, as the great Woody Guthrie demonstrates:

That said, I do have lots of issues with the folk scene. One of the music tents was a dedicated Céilidh tent. Now I love Céilidh music but unfortunately you now can't seem to see a Céilidh band without the addition of a caller shouting dance moves from the stage. It's so regimented and frustrating. I don't want someone telling me how to dance. I want to enjoy myself on my own terms and I get the impression at Céilidhs, from the hordes who really like to take their fun seriously, that you'd be asked to leave if you just started dancing your own way somewhere on the dance floor (if there was space). And I must say, if the BNP really want to infiltrate the folk scene then there was a whole dance tent of willing people who unquestioningly respond well to orders. Each to their own and all that but I'm afraid I prefer not to have my fun dictated to me.

So we left the Céilidh tent and headed over to see Devon Sproule in the Concert Tent, only to find it was all seated. This is another thing about folk gigs I hate. Why seats? Ahhhh. I've seen too many gigs killed of their atmosphere because folkies want to sit down and stroke their beards. I once had an argument with a promotor for putting the excellent Eliza Carthy and The Ratcatchers on in a seated venue. Absolutely no atmosphere, despite the band being stunningly good and extremely lively. Now Devon isn't in the same league as Eliza and on this night she wasn't great but I'm prepared to give her the benefit of the doubt for having to work in extremely difficult circumstances. How can you perform dance music when you can't feed off the audience because they are sitting down and clapping so politely at the end of each song? Unfortunately, the drunker I got, the more I wanted to dance - especially when the completely underwhelming Demon Barbers came on. Not really my cup of tea but dancable if you've enough cider in side ya. But alas, it was all order order order. Hmmm, Folk Against Fascism may have their work cut out for themselves.

Luckily not all of the stages were this regimented and you could dance as much as you liked in the Festival Dance Tent which Claire and I called in on as we danced our way back to our tent, only stopping for a crêpe and maple syrup on the way. Towersey, we'll be back, but please only put seats around the edge of the dance floor and keep a space in the Céilidh tent for me to dance my own jig!
Posted by Dubdog at 17:57

you've got Céilidh dancing wrong: The dancers are being directed so they can dance as a coherent whole. The dancing experience thus breaks the socially constructed norm of the individual, and replaces it with the experience of social unity and interconnectedness. With the right caller, and enough Thatchers cider, Céilidh can, therefore, be a transcendental event, and a prelude to revolution.