Branded in the night 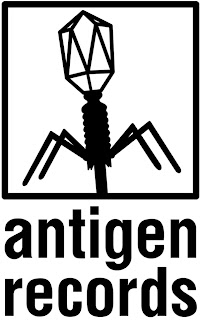 I got branded last night at a gig - with a logo I created! And despite many attempts to wash it off and after having a shower this morning, it's still there. I always thought my work would come back to haunt me. 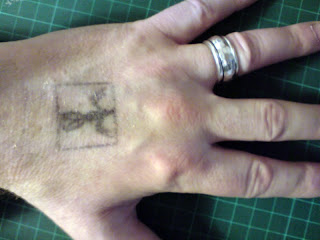 I created the logo for Antigen Records last year and have since worked on a label for a limited edition 7 inch release of Earth Mother Fucker's 'I Fuck, Therefore I Am', (due for consumption by the general public early 2010). And indeed, in applying typography to a photograph supplied by Antigen's Jason, I branded the mustachioed gentleman in the image with the Antigen logo, which, in my hungover, tattooed state this morning, fills me with a sense of irony and moustache envy. 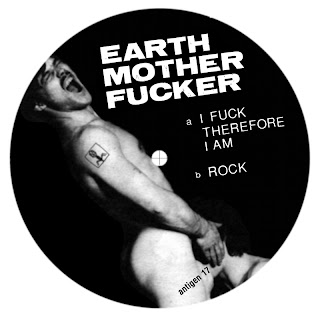 The typography for this label was an exercise in creating a lo-fi aesthetic and I trawled both Jason's and my curling Letraset collection in order that I could capture that home-made, untutored look. This Letraset collection hasn't seen the light of day since creating record sleeves and posters for bands, pre-computer, in the late 1980s, early 1990s. In trying to emulate that vernacular, I found it was actually more difficult than I thought to try and ignore my typographic sensibilities and not worry about mistakes in kerning and baseline alignment. In fact, before training as a graphic designer, when I previously used Letraset, these mistakes would happen naturally despite my attempts otherwise. Now, I have to force them.

As for all things Antigen, they are going from strength to strength, albeit on a local, small-scale basis. The Earth Mother Fucker single is the first in a series of 7 inch lathe cut releases which will be sold both separately and in a box set. Last night saw the debut gig of These Are End Times, to my knowledge, Ipswich's only post-rock band. They are going into the studio next week to record some of their material. Likewise, Antigen's Bring Back Her Head were selling their CD at only their second gig and The Waxing Captors, who rounded off the night, were celebrating having just signed to the label and are about to start recording a CD in January 2010 for release next spring.

All this only three weeks after another successful Antigen gig, although then there wasn't a guitar in sight, featuring John Callaghan, Antigen's Henry Homesweet, Mr B The Gentleman Rhymer and Mixomatosis's last ever gig. 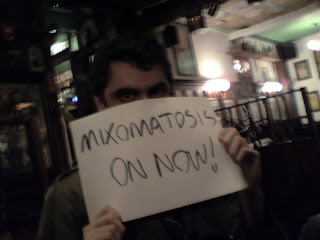