Not being a football fan I'm not looking forward to the coming World Cup. The appearance of football related gumpf hanging from the ceiling of my local co-op about 2 months ago announced the start, and now flags are appearing on about every fourth car that passes me as I walk to work. Patriotism is something I'm as equally baffled by so this is just as annoying to me.

But then, trauma of traumas, it happens. I should have predicted it. As different establishments jump on the bandwagon, out come the George Cross AND Comic Sans posters! Here's the first I spotted today in a pub somewhere near Ipswich, (I'll keep their identity hidden so as not to be accused of advertising). 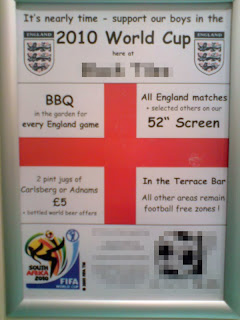 The shame of it

So, I'm running the very first Dubdog competition. Submit your photos to me of your sightings of this dreaded triptych atrocity of Comic Sans, Football, and the George Cross. The person who emails me the one I deem the worst will receive an A3 McJunk print. I'll post all submissions to Flickr as they are received. My email details are available from the Dubdog website.

Competition closes whenever the World Cup does. Dubdog's decision is final. No cash alternative offered.
Posted by Dubdog at 17:28

Unlike the Queen, the government, the flag and the army, the Football team represents the people. Baffling as it may be to you and as much disgusting design (or lack of) that it produces its still one of the few things that no matter how bad the team are or how commercial the game gets, your average working class Brit feels like its theirs.
Not something to be sniffed at in such disenfranchised times.

Oh poor England, my poor England and it's little band of Lion Hearts......sorry I'll read that again..........Lying Tarts Those poor brave English Footballers who gave their very all, and nearly cried trying to made it to quarter final glory.

Yeh right rewind 4 years almost the same players losing in the same lack lustre way. Well even if I'm not entirely happy with their role at least the Army and the Queen do what they're paid to. I'm not so sure about the Government in that respect, but at least you can get a decent education out of them. Can't see the same coming from.....oh ok David James maybe.....oh but then he did actually do what he was paid to.
'What England Expects.'

I think you'll find the 'average working class Brit' in reality, if they thought about it, identifies more with the football of the lower leagues, and that of Saturday afternoons & Sunday mornings where the game is played with passion, and a thought purely of winning not media coverage and personal sponsorship.

Not only do I sniff at it I alzo thum my nose at it.

No one entered. No one won.

Is there a prize for identifying the establishment in the picture?