Where is my mind?

I was sure it was Kurt Schwitters or Man Ray, or another one of those Dada bods. I was also sure it was the Cerne Abbas Giant, the chalky guy who is always pleased to see you. 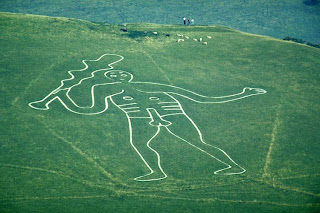 So when holidaying in Dorset recently, and passing Mr Phallic on a nearly daily basis, I commented to Claire that I wanted to recreate a photograph in honour of Dada.

In my mind, Kurt Schwitters, or whoever, was standing near where the visitor car park is today, with the giant in the background about a mile away. In my mind Kurt was looking straight at the camera, pretending to hold the giant between thumb and forefinger playing with perspective and creating an optical illusion. I described this vision to Claire and we pulled into the visitor car park after a day out climbing hills on the Jurassic Coast. Ignoring the tourists staring at us, I proceeded to follow Claire's art direction and pose, thumb and forefinger held up at shoulder height in the middle of a car park. This is the result… 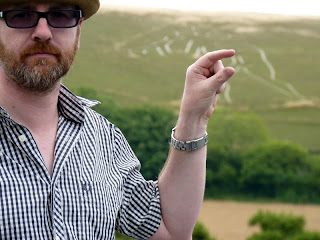 When Claire showed me the result, I pointed out her misinterpretation of my interpretation, and we both pissed ourselves laughing, much to the bemusement of the hikers walking past at that moment. I'm not sure who this photo says more about, my failure to accurately describe from memory, or Claire turning an artistic homage into a knob joke. We gave up at that point as the rain started to piss on our parade.

Attempts to Google the original failed before it even begun as the o2 reception was rubbish in Dorset, so I couldn't show Claire the original to clarify what I had in mind. So on returning home from holiday, between unloading the car and ordering a vegetable balti, I searched my bookshelves desperately trying to unearth the original photo. Several design history and avant garde graphics books later, on the verge of giving up my quest, I turned to the ever brilliant Art Of Looking Sideways thinking, 'this is exactly the sort of thing Alan Fletcher would have included in his vast ideas repository'. 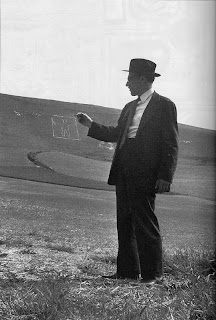 It was neither Kurt Schwitters nor Man Ray. Nor was it the Cerne Abbas Giant. It was the mighty Saul Steinberg 'drawing' the Long Man of Wilmington, in Sussex, several counties away from where we had been in Dorset.

All of which just goes to prove two things to me. 1) that I can't always rely on my memory, and 2) that, er, um, er… sorry, I'm not sure I can remember what the second thing is.

'Quite frankly I was horrified!!'