It's funny how your own work and creative concepts, in one way or another, come back to you. Earlier this year I wrote about a piece of work I'd seen that was very similar in concept to something I'd produced several years previously, read it here.

Then last week, when staying in our favourite B&B in Brighton, Claire noticed a postcard by the entrance amongst flyers for local events and tourist attractions. 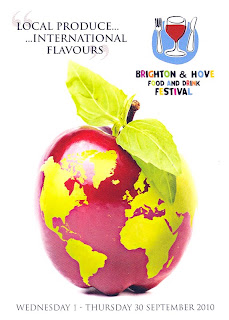 It struck Claire immediately that it was reminiscent of a piece I'd done, something I won an award for in 2002 for People Tree ethical clothing company. 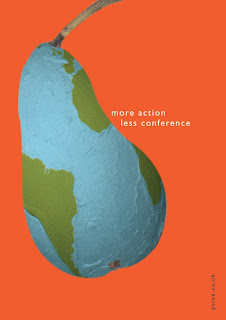 And while there is an obvious visual similarity, beyond an image of Earth being superimposed onto fruit, the concepts are miles apart. But never the less, as a creative, you can't help thinking, "Oi, that's my idea."

The question of who owns an idea surfaced again yesterday when I was chatting to a photographer colleague of mine and we were discussing Simon Roberts' book We English. He bought to my attention an interesting blog article called 'When Does Similar Become Too Similar' that discusses the similarity of some of Roberts' images to that of other renowned photographers. It is worth reading for anyone interested in the subject of plagiarism.

But we live in an increasingly image saturated world where we are bombarded with content from a wide variety of media on a daily basis. We flit from webpage to webpage, subconsciously soaking up what we see. Flick through magazines in waiting rooms, barely registering, we may think, the content. Who's to say that the designers who created the Brighton and Hove Food & Drink Festival fruit hadn't seen my work and it sat lodged in their minds for years without their knowledge. It's not inconceivable that as they sat around sketching concepts on a layout pad that the idea to impose the Earth on a piece of fruit popped out of the air, as if from nowhere. Far fetched as this may be, if it is the case that's fine by me, I'm not precious. The work is dissimilar enough in its metaphorical remit and execution, and my piece did its job 8 years ago and is no longer relevant. And when you consider that the illustration in the top right of the postcard has overtones of Paul Rand about it, who am I to kick up a fuss.

And after all this hyperbole, I have to admit to an underlying tone of arrogance to this post. For who is to say that when I developed the concept for People Tree that exactly the same hadn't happened to me, that I was influenced by something I'd seen several years previously that became lodged in my subconscious waiting for the right moment to surface? There is probably a blog post out there somewhere by a designer or artist discussing exactly the same thing, but about how similar that bloody People Tree poster is to something they did back in the day.
Posted by Dubdog at 10:54

You've stumbled upon the nature of Art - well done you!

But seriously.. as Picasso said "Good Artists copy, Great Artists steal".. and we all know that this is the very nature of things - to copy is natural - when it becomes out and out plagiarism, then that's when you start complaining. Right?