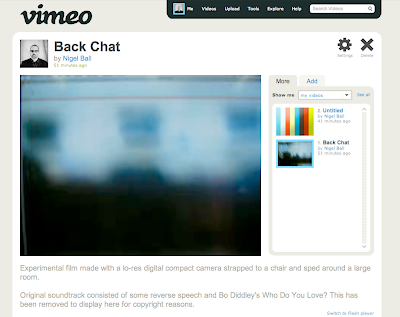 I've been meaning to set up a Vimeo account for a while after I realised a few months ago that my Ourmedia files had broken links. Currently uploaded are Contractual Freedom (2006) and the second film I ever made, Back Chat (2005) which hasn't previously been available to view since it appeared in an exhibition 6 years ago. Unfortunately I've had to remove the audio from Back Chat for legal reasons, which makes it less effective, but as an exploration in the process of filming then refilming footage, it just about holds together.

In the near future I plan to post DigiDigitDigital, my 2007 film exploring digital delay, as well as films I made in 2009 that formed the backdrop for the last Pindown performance Jason and I did in Colchester.

These works are being posted to document an explorative process I went through several years ago. I currently have no plans to make any more films, although as I start to investigate MA courses to do in September, this may well change.

too many http's on that link matey