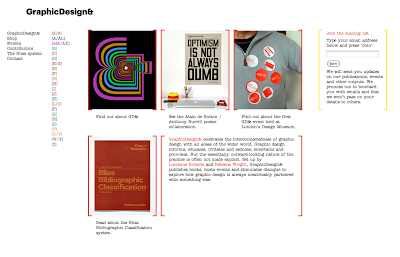 GraphicDesign& has recently been set up to celebrate the "interactions between graphic design and the wider world". Respected designer and writer Lucienne Roberts, and design educator Rebecca Wright, are behind the venture. Although still in its infancy, with the website content still in development, this could prove an important project for the future of graphic design.
The relationship between graphic design and where it meets society is something that I am particularly interested in. In fact, it could be said that this is exactly what McJunk is about. However, I think GraphicDesign& is pertinent for more than just a personal interest due to some of the debates that came out of the recent St Bride conference; Graphic Design: History In The Making. (See recent post about History In The Making here). At the conference, while debating why graphic design history isn't as revered by the public as art history, Simon Esterson, Art Director at Eye Magazine, commented that to engage the wider public in the subject of graphic design would best happen through discussing everyday design the public knows and interacts with. In doing so, he implied, this would have much more resonance than talking about glossy annual reports the same public will only ever see reprinted in a design press that they don't read. This is an opinion I wholly agree with.
One of the questions I came away with from the conference was whether graphic design historians and academics have a chip on their shoulder, particularly in relation to art history and the weight and pretensions that such a subject brings to the academic table? Graphic design has always been a poor cousin within the arts community in terms of stature bestowed upon it. Herbert Bayer stated in 1967 that, "the graphic designer is designated with the minimising term 'commercial' and is generally ignored as compared to the prominence accorded by the press to architecture and the fine arts", (source; Armstrong, 2009, Graphic Design Theory). Casting your mind back to any recent furore over rebranding costs slated in the press should prove a testament that Bayer's concerns are still true today.
Graphic design historians and writers should not be competing against fine art in terms of academic relevance or public acceptance. For a start, this displays insecurity. Secondly, the descriptor 'fine' art betrays an elitist attitude, and the last thing graphic design should ever be, as a discipline to be understood, is disconnected from the very public it attempts to communicate with.
It is for these reasons that I will be keenly watching the development of GraphicDesign& to see what it brings to the table. Graphic design needs more champions, and those champions should not try to shoehorn the discipline into academic precedents dictated by another, entirely different field of study. We should have the courage to set our own terms of reference.
Links:
GraphicDesign&
Lucienee Roberts
Rebecca Wright
Eye Magazine
Graphic Design Theory
Posted by Dubdog at 17:51