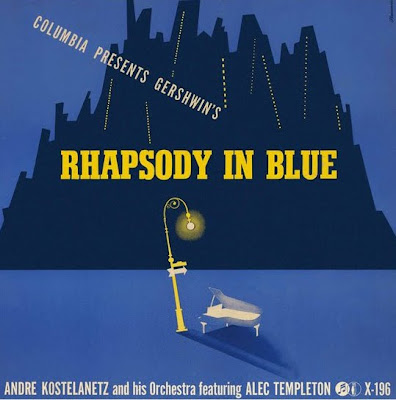 Despite the fact that I trawl design blogs daily, I seem to have missed the announcement that Alex Steinweiss died earlier this month.

Steinweiss has been dubbed by many as the originator of Album Art. This seems to do him some disservice in my mind. He didn't just come up with the concept of putting images on plain cardboard record sleeves, he produced some very beautiful images that were effectively evocative of the recordings they accompanied. In doing so he spawned an art form in its own right. We can never truly know whether there would have been no Saville, Garrett, Hipgnosis, Bubbles, Oliver et al without Steinweiss, although I think the majority of graphic designers (and music fans) can agree that we owe the man a great debt.

I've mentioned in posts here before that if it wasn't for record sleeves I wouldn't have become a graphic designer. One of the first pieces of artwork I did that I can call 'graphic design' was a mock sleeve for a Clash song in an art O' level class. Then, before doing a degree, what kept my visual creativity going while working in the print trade and through bouts of unemployment was doing artwork for bands I was involved in—cassette sleeves, record sleeves and gig posters became a hobby that I enjoyed more than actually being in a band. I was able to produce something that was tangible, and that had a direct applied link to another form of creativity. This gave me a bigger buzz than standing on a stage shouting at people. Many others have said similar things and I've lost count of the number of interviews I've read with graphic designers who cite record sleeves as their primary inspiration for deciding to pick up a pencil or mouse.

So it is with great sadness to hear the passing of Alex Steinweiss. Not because we won't see anymore of his work, he'd done with the record industry sometime in the 1950s, citing that his imagery didn't work for Rock 'n' Roll. We should mourn his passing because he was an innovator, because he bought us many fantastic record sleeves, and because his influence lives on through others.