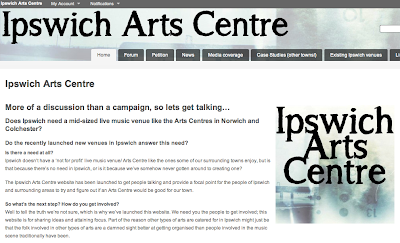 Ipswich has long been the poor relation to its neighbouring towns of Colchester, Norwich and Cambridge in terms of gig venues. The former two have thriving Arts Centres. Both attract touring bands as well as using these stages to showcase emerging local talent. The Cambridge Junction is another great venue with large and small stages. In the last 2 months I've been to see Magazine and The Fall at The Junction, and I have the choice of seeing King Creosote and Jon Hopkins in either The Junction, or in Norwich's Arts Centre this coming February. These venues are great for someone like me, who can afford to go to such events and is prepared to share the driving with friends, but it would be so much better if these sort of venues were available in my home town.
Ipswich has two large venues that rarely go below the £21 mark for a gig, and lots of small pubs with stages that (mostly) local bands use to play to each other. A new mid-sized venue has opened in the town, but seems to cater mostly for covers bands. There are a couple of rooms above pubs, (with no disabled access), that some promotors use to showcase some of the exciting things happening in the Ipswich music scene, but you have to hunt for them. There is no focal point, and anything that is happening is only doing so because of people doing it off of their own backs and who are prepared to do so in inadequate circumstances. With a cultural scene firmly establishing itself in Ipswich in the visual arts, dance, theatre, and film, it seems short sighted that there is no cohesive policy from the powers that be in the town to promote, encourage, and make accessible divergent music. Especially with a growing university.

Then recently a new Arts Centre for Ipswich was announced in the local papers as being on the cards. Planned to take the space of the former Ipswich Arts School and with a 3 year plan to get the venture up and running, there was much excitement. The excitement soon turned into bitter disappointment when it was discovered that this would not contain a space to be used as a music venue. How short sighted.

So disappointment has turned into action, of a sort, with a new website aimed at encouraging discussion to help promote the need for an Ipswich Arts Centre, and lots of local musicians are getting vocal. It appears it might be kick starting some useful debates, providing a focal point to rally around and looks set to prompt a few tentative meetings to look at what may be the next move to this project.

Check out the website here to read the full story, sign the petition, and to get involved if you have any interest in the Ipswich music scene.
Posted by Dubdog at 16:45