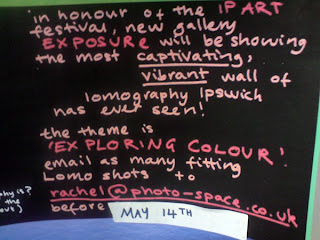 I'm amazed that the cult of the Lomo is still going!

Well, degrading lenses and with my 4 shots in a second lomo, the accidental can produce some interesting accidents. Oh, and a lot of useless, pointless accidents. Never-the-less, I'm going to submit some work to this exhibition and post more up on Flickr once I've got them scanned. However, I'm having problems with hairs (invisible to the naked eye until you get the Tiff up in Photoshop) being attracted to my scanner bed at the moment!

I bought one of the originals back in 1996 at great expense mail order from Austria, taken in by the hype. It does have its own idiosyncracies and looks wonderfully Soviet, but really one could do exactly the same thing with many other small and much cheaper cameras. The Lomographic society has however done a marvellous marketing job in turning it into a phenomenon, they must have made a fortune based on selling a job lot of redundant Russian spy cameras from a bankrupt factory and selling them onto hipsters. That's not to say that I haven't got a shoebox full of 'lomographs' of streaky street lights and people with two heads, in fact some of the pics in this:
http://directobjective.blogspot.com/2008/02/night-light-2-1999-2008_24.html
were shot with the Lomo.

For hairs on your scans the clone tool is your friend.