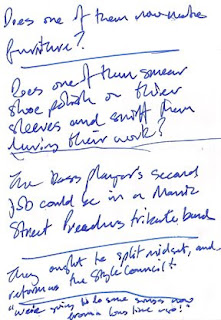 Above - drunken scrawls on the back of a flyer written while watching a Jam tribute band last night.

I thought they were pretty good, despite the fact I usually avoid tribute bands like the plague, but this was a spur of the moment decision after a surprise visit from an old friend. The drummer did a fair rendition of Funeral Pyre which was always going to be my benchmark.

Some of my drunken thoughts while watching the band:
Are they going to split mid set and come back after an interval as the Style Council?
David Watts - a tribute band playing a tribute band!
Does one of them restore furniture as a day job?
Both 'Paul' and 'Bruce' had Paul haircuts - do they toss a coin before each gig to see who's going to play at being Paul?
Does one of their father's manage them and drive them to gigs?

Quotes from the stage:
After playing some of the more obscure album tracks..."I am aware that some of you don't know these songs, but I suppose that's not our fault, is it?"
Midway through set..."We're going to do some songs now from a long time ago." !!!

Despite the fact I do not go out of my way to see tribute bands, this is the third Jam tribute I've seen. The last time I saw one, after the gig someone said to me "They were good, weren't they." I had to point out that they did have the benefit of someone else writing the songs for them! Tribute bands are a bizarre phenomenon but not as bizarre as the audiences that go and see them. They get so worked up, mouthing every word, reliving a little bit of their past to what amounts to little more than a well rehearsed group of over zealous session musicians.

Try reading your scrawled notes putting "-ah" at the end of each line. Result? A Fall song!

I've been considering what a Storm Bugs tribute band would call themselves. I'd vote for Eat Good Beans.

how about:
Exercise in Futility
Hiding to Nothing
We Need to Get a Life
etc, etc