It's a stupid time to think about moving house in the run up to a recession I know. But when something comes on the market that you've been coveting for a while in a location less than one mile from one of your favorite places, an isolated and wild stretch of the Suffolk coast, a place where you've spent summer holidays, wedding anniversaries and countless days out, it's an opportunity too good not to follow up. So as a result I've been doing a little de-cluttering as the house is slightly smaller than the one we currently live in. I took to this process earlier this year for a different reason and either recycled, free-cycled or took stuff I no longer wanted to charity shops.

However, there was little chance of anyone wanting my cassettes in this digital age and our local council won't recycle this sort of plastic, it being too brittle to do anything with. So, unfortunately, I've had to throw them away. Funny, because I was burgled when I lived in Colchester many years ago and I was gutted that the person that broke into my home stole my cassettes. I had so few possessions then, the friend I shared with and I only had a portable black and white TV and a cobbled together stereo system. I guess when the thief searched for stuff to punt on he was disappointed that we had so little and took what he could carry, which other than my extensive tape collection included a tape deck, an amp and my hair clippers. Ironically, he also took the only item of self-defense I kept in the house, an aluminum baseball bat.

I was most annoyed by the loss of the tapes at the time as many of them were irreplaceable; a fair number were of albums that had been deleted, there was a collection of edited John Peel shows, stuff that I'd taped off people I no longer knew and most importantly the only copies in existence of music I'd made. Luckily, or so I thought when I first heard the news, the police caught the guy. When they raided his flat to search for evidence from another burglary, they found all our gear. He had the stereo equipment set up in his flat and all my tapes scattered round. So, I eagerly signed for and bundled all our possessions in to the back of a car, under strict instructions by the police that this was the one and only journey I was to make with the baseball bat in the car, and drove home looking forward to setting the stereo up and listening to some of my tapes. On settling down to an evening of reacquainting myself with the lost sounds, I found the burglar had taped over much of the material with very poor, sub Tim Westward, late night weekday Radio One. What a complete and utter Bastard.

In those days there were times in my life when I had so little money that when I found a new piece of music I wanted to commit to tape, I would trawl through my collection and decide what, if anything, I would be prepared to record over, sticking little bits of masking tape over the protection holes to enable me to do so. To go through all this and then to decide to throw away all these cassettes seems like a travesty, but I haven't listened to them in years, and this seems even more of a travesty. They had been sitting in a cupboard collecting dust, forgotten until now. Many of the albums, the really special ones, have since been bought or burnt to CD. And like I said, we need to de-clutter. So another break with the past. I recycled the card inlays, naturally, and obviously kept the dub and reggae tapes, but past that I'm afraid to say that a large chunk of my listening past has been redirected to a landfill site. I'm not proud to admit it, but it's done now. 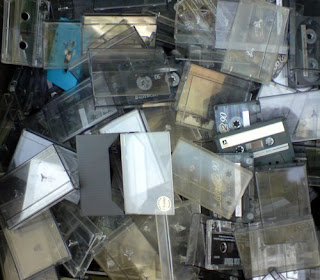 I feel your pain