If you go down to the beach 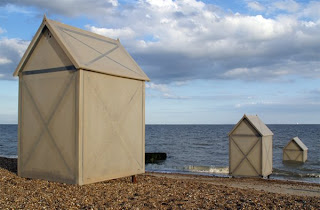 Yesterday I went to the private view of Purple Snail's latest exhibition, titled 100:50. This, their third exhibition, is a break from previous shows where each of the Snail's exhibited their own work in a gallery, (I say gallery, but in fact it was actually a tea room on Felixstowe prom!) This time they've collectively created an installation on Felixstowe beach to highlight the plight of global warning. If you're in the area it's well worth a look. Head for the Spa Pavilion and you won't fail to see them. Especially at night as it lights up. Unfortunately I had another engagement to attend so couldn't stick around to see them illuminated, but there's a photo on their blog which looks pretty impressive. I'll certainly be heading back one evening when I've more time.

I did stick around to be served a complimentary glass of bubbly and a free ice cream from the van they had organized. Two firsts for me, not only have I never been given a 99 at a private view before but I also have never seen Mr Whippy in a Clash T-shirt! I don't think Strummer had ice cream in mind when he wrote White Riot but I might be wrong.

The exhibition runs until the 15th September, and while you're there you can book tickets for Chas and Dave at the Pavilion.
Posted by Dubdog at 16:33