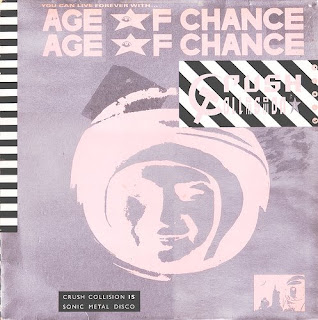 Alas, The Designers Republic are no more. The Age of Chance sleeves were the first thing I saw by them. I hadn't thought about it until now but I guess they even designed the hammer and sickle cycling gear AOC wore on stage when I saw them at Colchester Uni back in 1987. TDR went on to bigger and better things but the buzz of studying those sleeves and thinking wtf is this all about while listening to the 'sonic metal disco' that was Age Of Chance is another example of graphic design having ruled my life for over 32* years. I didn't realize I was obsessed at the time but the bright silver sleeve (this photo doesn't do it justice) and the icon fest that adorned the paper insert kept me wanting more. It was so much more to do with the whole package than just the music.
More info about TDR's demise can be found here on the Creative Review blog.

* I can first remember being fascinated by a poster I had of The Beatles when I was about 8 and loving the fact that the all caps logo had the T in 'Beatles' descend below the baseline. As previously blogged here, I then later became fixated by the whole Two Tone iconography.
Posted by Dubdog at 17:45