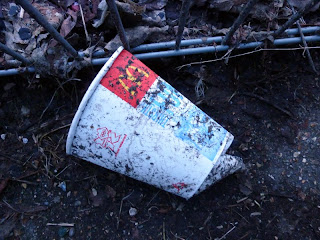 As the McJunk book nears its final stages, (fifth rewrite, second and third reader checks to arrange, finalising layout and folio decisions, selection of the cover shot to make, etc), there's been a huge increase in the number of views of recent uploads of the project on Dubdog@Flickr. The piece above, '426', has had 95 views since posting 5 days ago.
This probably isn't a great deal for many Flickr users, but it is for me. I usually only attract 4 or 5 hits on shots of locational typography. This occasionally increases if I include profanities or sex and conspiracy theory related words in my tagging.
I've submitted, via requests, to a few Flickr groups recently and this probably accounts for the increase in activity. This is a great incentive for pushing on with the book which keeps taking a back seat to the day job. I might even get some sales at this rate.
That said, there might just be one person who has looked at '426' 95 times!

McJunk: the book, 80 pages of graphic design introspection and pictures of McDonald's litter, will be published via blurb.com, August 2010.
Links:
McJunk
Blurb.com
Posted by Dubdog at 18:39