All over, people changing their votes.

I'm not sure about the logo for the Norfolk and Norwich Festival. 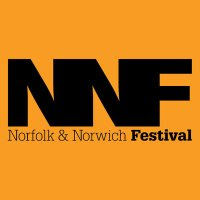 Taken with out too much analysis, it's not objectionable. However, growing up in the 1970s, I can't help but see a resemblance to far right National Front graffiti I saw scrawled on many a wall. 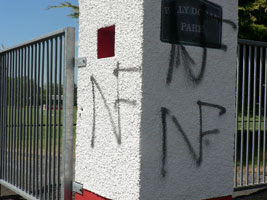 You can obviously read a certain amount of irony into the NNF logo's similarities to that of the National Front's, in that the festival is truly inclusive with many international artists performing. As the festival brochure points out:

"The arts, which create pictures of potential new worlds, are ideally placed to guide us through periods of change. Jordi Savall’s Jerusalem, for example, makes the possibility of Middle East accord believable, while Ian McEwan and Metis Arts explore a world after the environmental tipping point. And if, like me, you tell people from elsewhere stories of why our part of the world is such a vibrant and appealing place, rare performances by John Cale (co-founder with Lou Reed of the Velvet Underground), Michael Nyman, David McAlmont, Paco Peña will help us tell that story." Jonathan Holloway, Norfolk and Norwich Festival Artistic Director.

It would be some stretch of the imagination to suggest this the NNF logo was a deliberate design savvy attempt to 'claim back' the NF one, an arguement I'm firmly against when it's applied to the Union Jack and George Cross (let it go Billy, move on). I'm more incredulous that this similarity wasn't spotted by whoever created it, or by the cultural committee at the festival when they approved its use.

But then, maybe I'm just being a bit nazi sensitive at the moment having just returned from the polling station: I still find it a shock to see the BNP on a ballot paper. Thankfully they have not been leafletting in my area and have no chance of getting any significant returns, but it doesn't sit easy. And with that, Joe Strummer's line from 'White Man in Hammersmith Palais' has been ringing through my ears recently:

"All over, people changing their votes,
Along with their overcoats.
If Adolf Hitler, flew in today,
They'd send a limousine, anyway."

But as I say, I may be feeling a little bit too sensitive at the moment. I think I need to go and hear John Cale doing Paris 1919 or see the Mick Jones Public Rock & Roll Library, both at the Norfolk and Norwich Festival. I'll just have to try and not look at the logo that'll be emblazoned on everything.