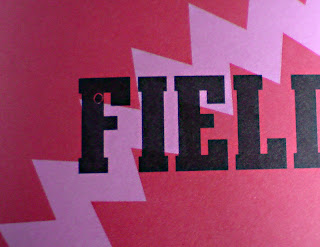 See the hole in the F? That's a hickey.

You have to have a keen eye to spot them while on press and when you do, you have to remove the piece of grit by stopping the machine and carefully using a cloth or finger to wipe it off. I've seen printers try and do this while the press is still running. Not a good idea if your rag gets caught.

The printer should also hunt through the printed sheets and remove them, or tag the affected batch for the finisher to remove later, and add an according number of overs to the print run to make up for the wastage. However, they can often get missed and end up in the finished job.


Printing errors will become a repeating post to Dublog, as and when I spot print errors in publications I come across. They will consist of terms and explanations of errors I picked up in my time as a printer/finisher many years ago. For the purposes of these posts, printing errors refer to anomalies that are thrown up through the process of offset lithographic printing, not typographic mistakes, which are often wrongly attributed as 'a printing error'.