In 2003 I took a series of photographs of buildings on Ipswich quay. These concrete beasts were a local landmark and due to be demolished to make way for a redevelopment of the area. 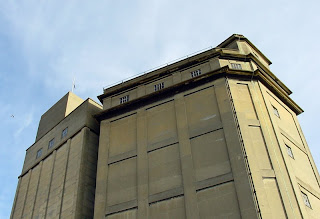 This is what I wrote about these photographs in 2008…
"I had always been attracted to these buildings situated on Ipswich Quay. Sheer monuments to function, they lacked any flourish of decoration; their only purpose was purpose. I saw a beauty in these audacious concrete monoliths that, once I learned they were to be demolished, I had to capture. They have since been razed to the ground and replaced with flats for people who own yachts."

In their place we now have:
A second Pizza Express
The Jerwood DanceHouse
Several Bistros and Cafes
The Mill, a 23 story apartment block
An extension to a hotel
More flats

Unfortunately, the town planners have so far failed to address the two busy roads that separate the town centre from the quay. This forms a physical and psychological barrier and unless you have a specific reason to be there, you literally have to go out of your way to enjoy this part of town. Therefore, the artistic impressions drawn up for the planning stages of this regeneration are more populated than the reality. To be fair, it is much more populated than previously, when people had to dodge large grain lorries. And now the waterfront university is establishing itself, you can see the potential.

Unfortunately, there is still an element of stasis, as work stopped on another apartment block a year ago and it has stood skeletally dominating the skyline ever since. An enormous metaphor for the recession. 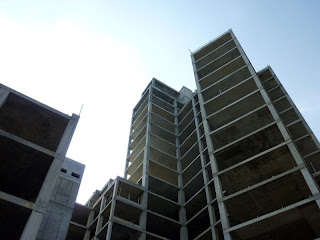 In some ways this is a fitting tribute to the old concrete malt stores that stood on this site for many a year. It's a shame that it is all boarded off though, and you can't freely walk around this ghostly structure. 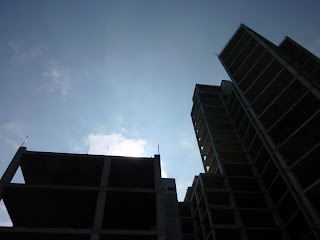 Good news though, I heard a couple of weeks ago that work is to start on this building again, once new student accommodation being built on the waterfront has been finished in August. All we need now is a little joined up thinking to create a joined up town because unless you are a student, tourist, yacht owner, work on the waterfront, use the quay as a cut through to the station or have the luxury of extended lunch hours and expense accounts, you're unlikely to go there often, if at all. 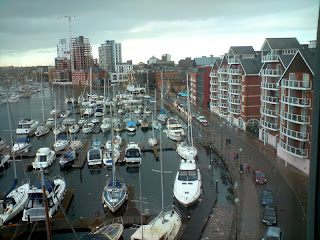 Before the cranes came down, Nov 2009

Brilliantly put Mr Dog, you should be the town planner.

I know that it was built way before you opened your eyes on the world but Greyfriars, a complex envisaged by it's architect of having a supermarket, flats, restaurants, varying sized retail outlets, a covered market (ah who could forget Mike Hindles 2nd hand record stall), night club, and a car park on site suffered with the same basic problem that you are now showing the Waterfront may become victim of. Separation from the rest of the 'Town Center' combined, may I say it? With the usual 'town' malaise that Ipswich is so famous for. If you look back through the 'plans' for Ipswich and surrounds back to the early 60's you can see where at just about every juncture 'they' got it wrong.
Short list
Greyfriars - too far out of town center.
Carr street precinct - Just of reach of perceived Town center, no car parking, no shops.
Tower Ramparts - Town Center too small when it was built, poor layout does not enable people to cover all its ground in a natural progression, no flag ship store now, no car park.
Buttermarket - Massive area demolished and cleared to produce a relatively small shopping center, completely different to original drawings. Has a car park but its flagship store is little more than a pound shop doing well for itself.
Gaumont/Odeon/Regent - An adequate venue oft let down by the plethora of dross offered by its management.
Crown Pools - Huge thing made of building Ipswich’s newest pool and then they built it something like 1 metre short of required competition pool length.
Although we are close to Britain’s busiest container port we still have no decent road system – a proper motorway link to both London and the Midlands/North would help the East of England compete with forthcoming competition from the East London/Sarf Essex area.

Those buildings you photographed I remember in their heyday providing lots of people with good well paid jobs and secure pensions. Why has none of the planning around the dock area taken advantage of the track system already in place to provide some kind of mass rapid transit system? My guess is once again the old Ipswich real lack of ambition. Heck I believe I’m right in thinking Ipswich apathy even goes back to Thomas Wolsey’s time.

I wonder if the ‘Mint Quarter’ will be developed in my life time ‘Mint 0.24 percent’ more like and to bring it in line with annoying the Daily Mail readers.

Footnote glad to see that the route I use for the only reason I go into town, to get my haircut, is to be curtailed (Back Hamlet), and in future I shall have to take a longer route to achieve the same lock shearing.

Word, as they say in hip hop land.

Someone suggested to me there should be a tram system running between the town centre and the quay. Now that really would be a good idea. However, in these Tory days, I can't see that happening.

And what of the old Odean. What a wasted building, it would make a great Arts Centre, along the lines of Colchester. But that takes vision, and people willing to put in the effort. So Kevin Niggle, fancy sinking your riches into a project with me. Shall we draw up a business plan next time me catch up, assuming you are who I ink you are!

You are indeed a very brave man and I applaud your nieve bravery and weep for your sanity. However I cannot find the courage to support you in your suicidal plan to convert the old Odeon into an Arts Center. It is my belief that 30,000 brolley waving bingo mad pensioners might consider someone for serious harm if that was to happen.

However the new Odeon is a different matter altogether, because as you are obviously very aware, it is and has been closed for many years. I personally think the building is enigmatic in so much that its design was visionary and I hope the architect responsible felt very chuffed and smug with his creation he deserved to. But something about it lacks soul or warmth, or feeling. It evokes a yawn, maybe it is its location which is typical of the mishmash misaligned oh-I-give-in let’s just put it anywhere Ipswich attitude I'd say it was on a par with Willis Faber in design thought, and (what's that when something looks like it should and pleases the brain?) the visual equivalent to onomatopoeia. The leaders of IBC & SCC should be made to hand wash the building so it once again shines in the evening sun aspiring to be a shiny Fritz Lang creation or indeed a remiss of film cans waiting to be screened. Wouldn’t you prefer to see it converted into either a Wetherspoons or a Coffee type outlet – I know everyone else in Ipswich would because they all feel so underprovided of ill-afforded coffee outlets, or indeed the offer of 2 drinks and 2 meals all for £4.50 and made from the finest ingredients man can find. Not to forget a free go to win the £ shop trolley dash. If you were willing to lose everything for a venture into the wilderness I’d certainly consider it………then Mrs Niggle would injure me.

Nah to Tram systems lets have a Tramp system whereas we could have a layout of tramps whereby for a small fee they would carry a ‘gent’ and indeed a ‘lady’ aboard their Tramperline (pronounced tramperleen) to the requisite destination.