Peasant in the big city

I've been up and down the East Anglian line between Ipswich and London this last week so much I'm beginning to get to know the people who work at Delice de France on Liverpool Street Station.
A student trip to the Barbican Curve gallery on Friday took in the Damián Ortega show. The Mexican artist has responded to a newspaper article everyday for a month. He's produced some dramatic and inventive installations in response to a challenging schedule that sees doors and window frames floating above your head in response to a story about a hurricane, an airplane made out of cigarettes to represent Ryanair's CE denying the existence of climate change and a bicycle impossibly laden with a fridge, bed, suitcases etc in reference to an article about refugees. Well worth a visit, and it's free. Details here.
I covered a stand at the Design Your Future UCAS event at ExCel for University Campus Suffolk on Tuesday. 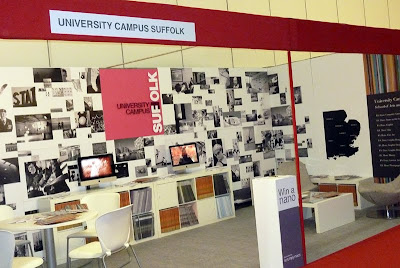 There appeared to be lots of interest in graphic design from the visiting FE students. This was mirrored across other universities from the fellow exhibitors I spoke to. This is a bit of a change from last year which saw a fairly even mix of interest across creative disciplines.
The UCAS event aside, and the hideousness of the inside of the ExCel Centre, I found the Docklands Light Railway (DLR) strangely appealing.
I was in London again on Thursday evening, unfortunately not traversing the pleasures of the DLR, but instead for a lecture by Creative Review editor Patrick Burgoyne for The Typographic Circle titled 'On Liking'. The talk went from Facebook to the 2012 Olympic logo, Crouwell vs Smile In The Mind designer preferences, Exactitude (check it out), rational and emotional judgements, Pimentel & Heckler's theories into persuasive imagery, what he termed the Twiggy Nadir ("if I see that M&S advert one more time I will kill someone"), as well as discussing examples of the designer's challenge to get clients to 'like' their work over and above rational explanations about appropriateness. He then opened the mic up to the floor where creatives discussed their experiences of getting clients to like their proposals. I managed to sneak a quick word with Patrick afterwards and he seemed to like the fact I'd banned students from using the word 'like'.
So, an interesting week all round that has sparked lots of trains of thought, and lots of thoughts of trains and a dream of getting the DLR to extend to Ipswich.
Posted by Dubdog at 13:43