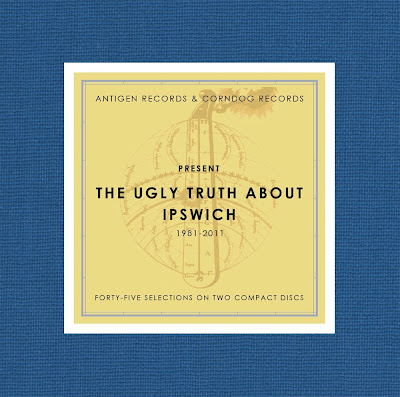 Saturday night saw the launch party of the double CD, 'The Ugly Truth About Ipswich'. The CD features many bands from Ipswich's 30 year back catalogue, along with more current bands doing the rounds. I'm particularly pleased, as one ex-half of Pindown, to be sandwiched between Earth Mother Fucker and Tender Lugers, two of my favourite tracks on the release. Alongside such delights are Extreme Noise Terror, who are the only band on the CD who can claim the duel boast of inventing a musical genre and to have appeared on stage with KLF at the Brit Awards (R.I.P Phil), and the short but perfectly quaffered 1980s pop icon Nik Kershaw. Ipswich's musical history is nothing if not diverse.

The launch party featured Henry Homesweet, The B. Goodes, These Are End Times, Jack Rundell, The Waxing Captors and Broken Shapes (ex Life And Times Of) across two rooms in an Ipswich venue, with a CD being given away with the ridiculously cheap admission price of £1. However, fear not if you didn't make it and want to get your hands on a copy of the CD, it is available from the Antigen Records online shop for £0.99. More details about Antigen Records can be found on their Facebook page.