I have been showing this record sleeve in a lecture on postmodern graphic design for the last two years. 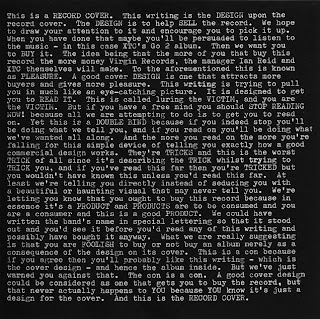 The main reason for showing this piece, other than the fact it gets a good laugh, is to highlight the use of irony as a design tool. However, I have never seen the rest of the sleeve. Today, a student approached me and produced the actual vinyl album from his bag. He had bought it from eBay for £3. 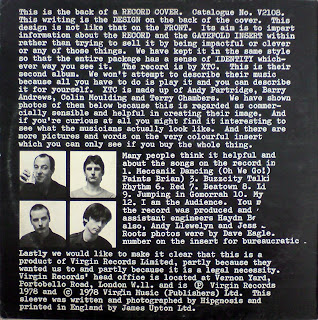 The design team that created this new wave piece of classic design was Hipgnosis, who are probably most famous for designing Pink Floyd's sleeves, and in particular 'Dark Side Of The Moon'. The detail here though is playful and forces the listener to interact with the entire sleeve both mentally and physically. For example, the text on the sleeve explains, tongue in cheek, the purpose of a traditional record cover design concept as being a trick to get the consumer to purchase the record and thus make money for the record company; this in itself engages the consumer on a cognitive level not evidenced on many record sleeves. Further to this Hipgnosis go on to make the track listing on the reverse unreadable unless you remove the 4pp insert and line up the missing text. 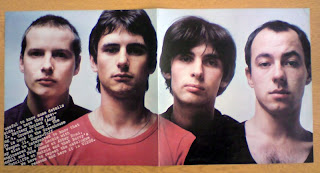 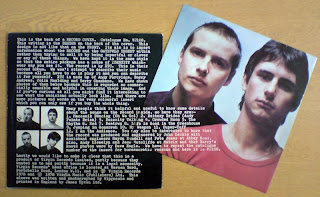 Remember, the insert wouldn't have been available to the casual record shop browser. But then that's the beauty of this sleeve. Hipgnosis knew that this approach would suit the quirky arty nature of XTC and their intended audience. XTCs music at this stage was pretty disjointed and angular. They have always tried to be a 'clever' band and luckily they lightened up and appropriated pop for later work but they were dangerously close to being pretentious in these early days. So this wasn't an album made to storm the charts with mass sales to those who love safe derivative music. The songs were inventive in comparison to their peers and XTCs fans were not, I hazard a guess, your average Elton John lovers. While I wouldn't describe the album as challenging, it certainly isn't easy listening when compared to what else was released in 1978 and was much more innovative than many of the second generation punk bands who were just poor pastiches of the Pistols, The Clash and Buzzcocks. 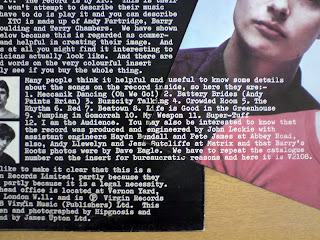 Hipgnosis even took the concept right through to the record label making for a fully rounded piece of design. 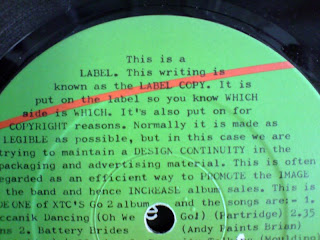 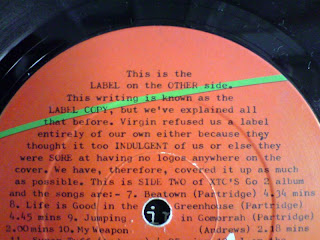 So thank you Scott for bringing this in for me to see and be able to share here. If you ever want to sell it, please can I have first refusal.
Posted by Dubdog at 20:50

Did you know that one of the Hipgnosis team was Peter Christopherson, a member of Throbbing Gristle (and would have been at the time of designing the XTC cover). So the neo-Situationist irony quota would have been well intact in that team. Personally I kind of prefer the pretentious XTC to the later neo-folky version. But I guess they were only making plans for Nigel (couldn't resist it).

Damn, Steven beat me to pointing out the membership of Hipgnosis..

Was just discussing the Hip and the Throb the other night, a fact I was previously unaware of but I agree, the fact does maybe seem significant in this design, especially as this is so different from many of the rest of Hipgnosis' output.

As for MPFN, a song that has dogged me all my life, I should have seen that pun coming. Top comedy marks to Steven.

Well the Hipgnosis and TG connection doesn't stop there. This rather dodgy album cover for Force It (you want bad comedy puns?!) by UFO is also by Hipgnosis:
http://static.rateyourmusic.com/album_images/524abe4493e7f8b82ed34edc8a27ff8e/24990.jpg
and features no less than Genesis P Orridge and Cosey Fanny Tutti as its models.

Hmmm, lots of irony there I see!