Talking films standing on a chair 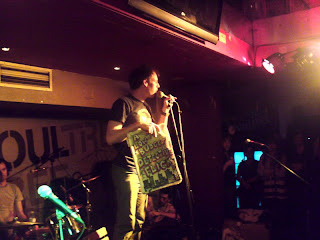 The brilliant Jeffrey Lewis performing one of his 'films' in Cambridge last night. The 'films' are narrated from atop a chair by Lewis with large comic book visuals. Great gig with him performing a stunning rendition of Crass' 'Big A Little A' from his album 12 Crass Songs and a 'History of Punk Rock On The Lower East Side Of New York From 1950 to 1975'. Fantastic stuff. If he's playing near you on this tour, go and see him - you will not be disappointed and if you haven't heard of Jeffrey Lewis, search him out on YouTube and you'll get the idea.
Posted by Dubdog at 18:39