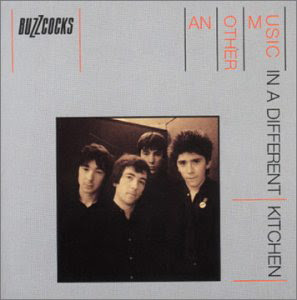 I bought the Buzzcocks first album,  'Another Music In A Different Kitchen', on vinyl many years ago from a second hand record shop in Mansfield. For the £2.50 I paid for it I was extremely pleased that the plastic bag promo that accompanied the original release was still inserted in the sleeve. Mine is in slightly better condition than the one in the image below (borrowed from a CR blog post about Malcolm Garrett and the Buzzcocks) and is safely stored away in my loft with the album and the rest of my vinyl collection. 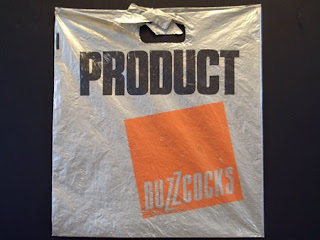 I loved the forced irony of the word PRODUCT proudly emblazoned on the bag which seemed fitting in contrast to the teenage homosexual and existential angst of Pete Shelley's lyrics. Anyway, moving forward about 25 years; in anticipation of seeing a reformed Magazine at Latitude festival later this year, I bought a Magazine T-Shirt, also designed by Garrett. (The link outside of Malcolm Garrett, for those not familiar with these important bands: Howard Devoto was the lead vocalist on Buzzcocks' first EP, 'Spiral Scratch', before leaving to form Magazine.) A few days after ordering my T-Shirt, it arrived in the post packaged in a rather nifty Magazine plastic carrier bag. 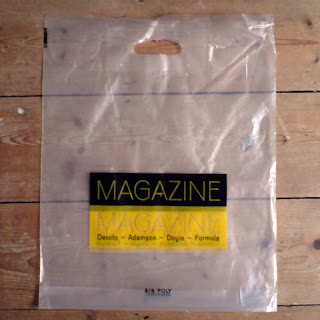 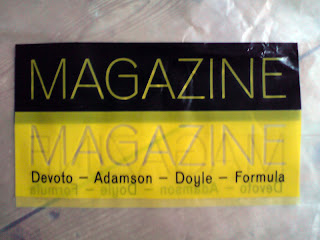 However, I won't be reusing this fashionable item as it's made of BioPoly and will photo biodegrade. Because of this I dare not take it out into sunlight for fear of it disappearing around whatever it may be containing. This is a great shame because I think I prefer the bag to the T-Shirt and although I'm all for biodegradable plastic, I would probably have reused this bag so many times that in sustainable terms I may have justified the energy spent in it's production more than it only having a once or twice use lifespan. 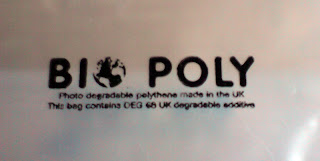 Guess I'll have to get up in the loft and store this bag in my copy of 'Correct Use Of Soap'.
Recommended listening:
Buzzcocks
Spiral Scratch
Another Music In A Different Kitchen
Love Bites
Magazine
Real Life
Correct Use of Soap
Play
Posted by Dubdog at 22:41